Home 2020 The Energy Ministers of Cyprus and Greece reaffirmed willingness to sign...

Nicosia, October 26, 2020 – EuroAfrica Interconnector, the project developer of the electricity interconnection linking the electricity grids of Egypt with Europe, through Cyprus, welcomes the meeting of the Energy Ministers of Cyprus and Greece in Nicosia.

The Minister of Energy, Commerce and Industry, Mrs Natasa Pilides and the Greek Ministers for the Environment and Energy, Mr. Kostis Hatzidakis, met at the Presidential Palace on the sidelines of the 8th Trilateral Leaders Summit Cyprus-Greece-Egypt which took place in Nicosia. 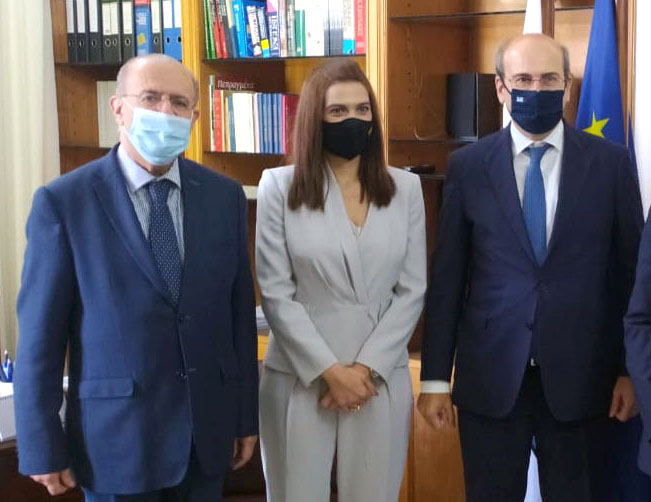 The two ministers reiterated their willingness to sign a Memorandum of Understanding between Cyprus, Greece and Egypt, for the promotion of the EuroAfrica Interconnector electricity interconnection project.

During the same meeting, the two ministers had a constructive discussion about energy matters, such as the participation of their respective countries in the East Mediterranean Gas Forum, as well as the latest developments in relation to the Projects of Common Interest (PCI) EuroAsia Interconnector and the EastMed gas pipeline.

EuroAfrica Interconnector is the “electricity highway” that interconnects Egypt with Europe, thr0ugh Cyprus, and establishes Egypt as an energy hub for Africa and the Arab world.

“We thank the two ministers, responsible for energy matters, who continue to support in every possible way the 498km electricity interconnection landmark project between Egypt and Cyprus which will be commission in December 2023, as well as the European project PCI3.10 EuroAsia Interconnector which will also be commissioned in December 2023,” said EuroAfrica Interconnector CEO Nasos Ktorides.